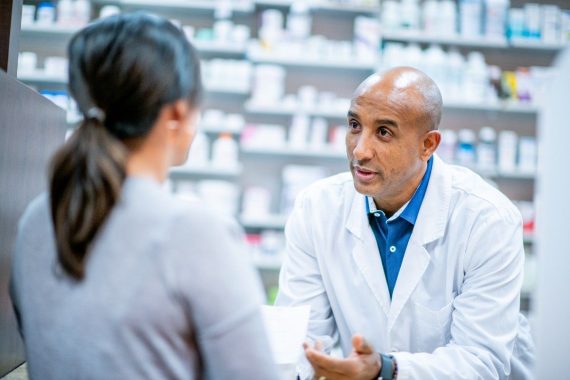 Around 40 million GP appointments could be saved if patients with minor ailments went directly to pharmacists instead, the community pharmacy negotiator has said.

GPs have been able to refer patients with minor illnesses to the Community Pharmacist Consultation Service (CPCS) since November 2020.

However, the Pharmaceutical Services Negotiating Committee (PSNC) told Pulse that referrals have been ‘burdensome’ for practices and that it is looking to remove the need for a GP referral to the service.

PSNC director of NHS services Alastair Buxton told Pulse: ‘We know that general practice colleagues are under a huge amount of pressure and pharmacies are keen to help them if they can do so.

‘Feedback from practices has been that while they support the intentions of the Community Pharmacist Consultation Service (CPCS), referrals to it are burdensome for practice staff.’

He added: ‘We hope to find a way to remove the need for those referrals so that pharmacies can more efficiently support general practice and we are looking forward to discussing this further with general practice colleagues.’

According to PSNC estimates, a community pharmacy walk-in minor ailments service would save 40 million GP appointments – averaging 12 minutes each and therefore representing around eight million hours of GP time.

A 2015 study showed 13% of GP appointments are for minor illnesses that ‘could be treated in pharmacies’ and with 312 million GP appointments in 2019, this indicates that around 40 million appointments could have been dealt with in community pharmacy, PSNC added.

The negotiator said the cost of funding the pharmacy walk-in service would be ‘far outweighed’ by the £640m annual saving the NHS would make.

It comes as NHS England told GPs in December that they must not ‘informally’ send patients to community pharmacies while prioritising Covid booster jabs, but must make a proper referral to the CPCS for the patient’s minor illness symptoms.

The service, which offers patients a consultation with a pharmacist for minor illnesses, has been taking referrals from NHS 111 since October 2019. It was extended to include referrals from GPs in November 2020, after a successful pilot.

GPs had to join the scheme before December to be eligible for NHS England’s £250m winter access fund.

NHS England previously said that around 10% of online GP consultations could potentially be referred to pharmacies via the CPCS.

Meanwhile, community pharmacy-led sites are set to be the primary delivery models for the vaccine rollout for five-to-11-year-olds, rather than primary care networks, given the ‘ongoing workload for general practice’.

GPs must not send patients to pharmacy without proper referral, says NHS England

Wow. Really? You think? Walk into a pharmacist? Is that like a groundbreaking scheme or mind map, Venn diagram you’ve conjured while working at home, salivating on GP appointment data? You don’t need to help General Practice, stop saying their name, and keep the bored and lonely parts of the public (not patient) on the high street like the rest of Europe; so doctors can be doctors, not grandmother’s and Dr Google. A walk-in pharmacy scheme. I can do that already, if I had a brain and the “see a GP” brainwashing for a free doctor opinion, for free, more free and free nothingness, blame game and trivial explanation” isn’t adopted, in the Deliveroo Amazon Prime culture. Think this is just mind blowing. Seeing a pharmacist first for whatever the Daily Mail threw out the sewer. “GPs must not refer to a pharmacist informally, but must fill in a referral?”. Yes like that happens. Well done NHS. Achieving nothing, progressing little. The profession looks forward to a poster with size 5 font. Keep the GP roped in, that sick joke continues. Europe laughs at a sweet talk of nonsense in 2022. You do realise pharmacists are leaving too.

If only we had a walk in service in pharmacy when i last had a cold.
Instead I had to make an appointment to go any buy my lempsip…..

no wait… i just walked in.

A new scheme has been proposed by NHSE to direct the public to opticians to get their glasses and contact lenses. A further scheme is being drafted with the RCGP innovation committee to fund a pilot where patients go to the park with unlimited access 365 days a year pending approval from NHSE, to excercise and lose weight instead of calling their GP.