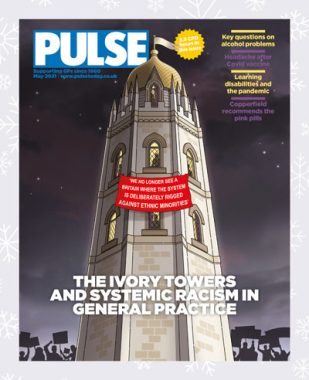 In the latest in Pulse’s review of the year, Allie Anderson looks at how non-white ethnic groups have faced worse outcomes in the pandemic

The term black, Asian and minority ethnic (BAME) is problematic, and not just because of semantics. It puts different ethnic groups, all with specific challenges, into a single category that is defined as not being white (which is, in itself, an ethnic grouping).

But, in terms of Covid, non-white ethnic groups face worse outcomes than white people almost across the board.

In the first wave of the pandemic, Covid-related death rates were 3.7 times higher among black African men – the worst-hit group – than white British men.[i] The trend follows for all ethnic minorities, except women in the Chinese or ‘white other’ group.

The disproportionately high number of healthcare workers from black, Asian and minority ethnic backgrounds dying from coronavirus is just one situation where non-white groups fare worse than white healthcare workers.

As Pulse explored in May, general practice is not immune to systemic racism.

Racial bias in general practice has been an insidious force for a long time. One GP told Pulse: ‘It manifests in myriad ways: a lack of career progression or opportunity; bullying and harassment; a lack of diversity at management or senior board level; and ethnicity pay gaps.’

Not much has changed since the fallout from the Dr Hadiza Bawa-Garba case. And despite attempts to tackle disparities between white and non-white GPs in outcomes of investigations, exams and inspections, those disparities remain.

Non-white GPs are more likely to work in singlehanded practices – which fare worse in CQC inspections – and in deprived areas, with higher proportions of BAME patients.

BAME patients, too, are impacted by the systemic biases that disadvantage non-white doctors. Vaccine uptake is a case in point.

Mistrust and misinformation have been obstacles to Covid vaccine uptake among BAME patients since the programme began.

In terms of representation, general practice is somewhat ahead of the curve. One-third of GPs are from BAME backgrounds, as are three of the sector’s four most powerful leaders – the health secretary, the director of primary care, and the chair of the GPC.

However, there remains a distinct lack of black people in leadership positions in general practice.

And therein lies one of the difficulties in the catch-all BAME moniker. It subsumes all non-white people into a single homogonous group, yet in the context of describing representation in top-level roles in general practice, it doesn’t include black people.

System racism is a very much a fixture in general practice. It’s a complex issue, as subtle as it is blatant.

And it’s a whole lot more than just semantics.

What’s in a name?

Amazing article the first time, even more amazing now published on the website.

Whilst this article makes valid points about systemic racism in General Practice, I’m not so sure it adequately explains the link to Covid. Higher death rates in Black African males is clearly multi factorial (eg low Vitamin D levels), whilst lower vaccination rates in different ethnic groups cannot easily be dismissed as being due to racism. In a country where vaccination is voluntary there are a plethora of reasons given for refusal, often linked to hysterical online misinformation. Whilst systemic racism may play a part in Covid, it’s important to recognise there may be other more relevant factors at play.

ps. Why are white males under-represented in GP? Could not possibly be that racism and sexism is present in selection and training.