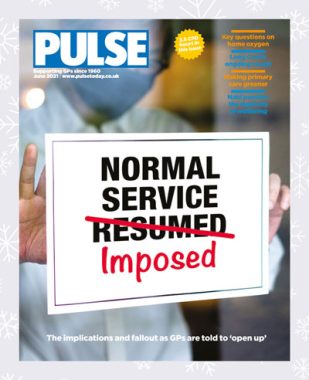 Today, in Pulse’s review of the year, Allie Anderson looks at the infamous letter from NHS England on face-to-face GP appointments

Lots of us relish getting post at this time of year. A Christmas wish from loved ones and some seasonal cheer from friends never goes amiss.

But back in May, GPs were the recipients of a most unwelcome correspondence from NHS England that offered anything but goodwill.

The now infamous letter, co-signed by medical director for primary care Dr Nikki Kanani, served as a diktat for practices to offer face-to-face appointments whenever a patient requested one.

NHS England said practices should ‘respect preferences’ for face-to-face care ‘unless there are good clinical reasons to the contrary’, such as the patient displaying Covid symptoms.

Practices were also told to open reception areas to walk-in patients, although patients should continue to be triaged ‘as they would be via phone or via an online consultation system’.

The letter was branded ‘tone deaf’, ‘a memento to incompetence’, ‘ridiculous’ and ‘insulting’. The result was a collective anger rarely seen in general practice, since many GPs had been operating pretty much normally under their own steam.

Having propped up much of the NHS during the first year of the pandemic, general practice had for some time been fighting the myth that their doors were closed.

Not only was NHS England doing nothing to support GPs and dispel this falsehood, it was also now using the narrative as a stick to beat the profession with.

By the time the letter was issued, 54% of GPs responding to a Pulse poll said they were already back doing home visits, 51% were doing non-urgent screenings and 35% were offering in-person enhanced services.

Some 9% were offering face-to-face appointments as standard, while 25% said their reception was open.

One LMC said in a statement that its practices had ‘been working at levels that actually exceed their full capacity throughout the pandemic and more so over winter’.

Fear accompanied the anger. Many practices said they weren’t ready to return to business as usual. Moreover, social distancing was still deemed imperative, and made it impossible to accommodate full waiting rooms.

NHS England sent the letter just days after it had declared there were no plans to return to face-to-face appointments. Just the previous week, Dr Kanani had penned a letter to the Telegraph in defence of GPs amid the storm of media attacks.

NHS England had also said it was issuing ‘wider communications and media plans to help … bust the myth … that general practice is not open’.

Six months on from *that* letter, we are still wrangling about face-to-face appointments.

Most recently, of course, the winter support fund was announced. But it was predicated on reprimands for the worst-performing 20% of practices – in terms of levels of in-person appointments.

Now, everyone is anxiously scrambling to get a million people a day vaccinated, to meet the target to give all adults their booster jab by the end of the year.

And routine face-to-face appointments will have to be sacrificed. The implications will be felt for a long time.

Let’s hope that if anyone at NHS England feels compelled to write to GPs again over the festive period, their pen is filled with ink rather than poison.

How normal service is being forced upon GPs

Data lowdown: Patients continued to escalate complaints during the pandemic