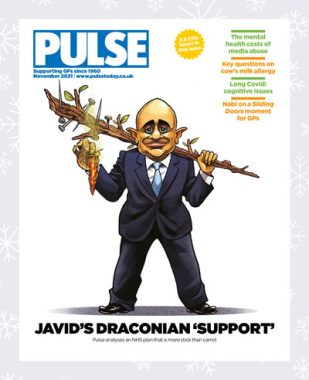 In October last year, NHS England released its anticipated package of support for GPs. However, GPs ended up feeling denigrated by the organisation that’s supposed to have their back.

Instead of providing support and encouragement for general practice, the plan was a very thinly veiled attack on the sector’s supposed failures through the toughest few years in the NHS’s history.

First, commissioners had to identify the 20% of practices that were apparently underperforming – those that provided the fewest face-to-face GP appointments and had the highest A&E attendances. These practices could be forced to partner with others to improve performance or face contractual action.

The aim was to increase the total number of appointments, bringing them in line with pre-pandemic levels, by November 2021. Practices that failed to do this would be offered ‘support’, as part of a £250m funding package.

In addition, patients will be asked via text message to rate how satisfied they were with access straight after an appointment, with results to be published later this year. Also up for publication is practice-level data on waiting times.

‘So, where’s the support?’ came the cry. One would be forgiven for missing it, since of the 29 initiatives set out in the package, just seven actually provide new support for GPs, according to analysis from the BMA.

Everything else is repackaged, offering only potential support, or nothing at all. And the seven initiatives are meagre against the punitive tone of the plan.

For example, some of the £250m will be used to hire retired geriatricians and more admin staff, provide more locums, and reduce bureaucracy by streamlining appraisals and enabling more people to issue DVLA and fit notes.

But QOF income is not fully protected, and the source of the supposed extra money hasn’t been confirmed. Access to funding will be based on whether localities can ‘demonstrate value’ – so many GPs may not see a penny of it.

Questions have been raised, too, over NHS England’s data. It suggests there are 1,200 more full-time-equivalent (FTE) GPs than in 2019 – hence, offering more patient appointments should be a piece of cake. It didn’t take much digging to discover that number includes all GPs in training.

The plan glossed over its purported stand against abuse targeted at GPs – even using media attacks on the profession as rationale for the demands contained in it.

Practices were advised by the BMA’s general practitioners committee (GPC) not to engage with any of the plan, though GPs didn’t need much convincing.

In a poll conducted before the package was announced, more than half of 6,000 respondents said they would be prepared to leave the NHS in the absence of adequate support in the current crisis.

A snap poll after the plan was published sent a clear message about whether GPs think the ‘support’ on offer is adequate. A massive 93% agreed that it was ‘unacceptable’.

All in all, the NHS England plan is a measly shrivelled, mouldy carrot with one enormous, barbed stick to bash general practice.

If it’s not careful, it will end up beating GPs straight out of the NHS.

A kick in the teeth for all GPs

Years ago I thought there was research done which showed that ED attendances were mainly predicted by how close the patients live to a hospital.
Also, EDs TEND to be in big centres of population. (Not all- Salisbury is a good example of one that isn’t.) Urban areas have poorer patients with a higher pathology load. It’s also where the GPs are paid least, so the correct thing to do, before bashing GPs would be to correct for pathology loads. That’s too complicated for some NHS managers.
Thirdly, for decades now the government (of both parties) has denigrated GPs, so the patients like to go to ED, because that’s where the “porper” doctors are.