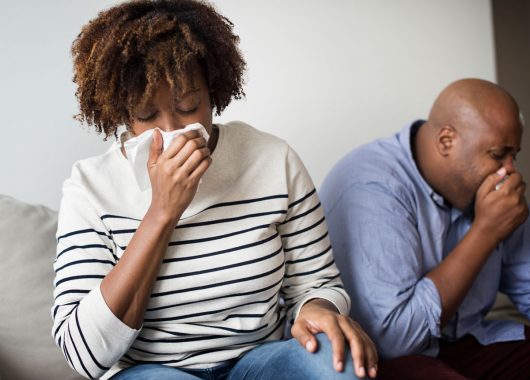 Very few people who develop symptoms of Covid-19 are following rules on self-isolation despite having good intentions, a large Government-funded survey done by King’s College London has found.

The news comes as the Government has, from today, brought in fines of up to £10,000 for people who refuse to self-isolate when told to do so by NHS Test and Trace.

Data from 31,787 people in the UK surveyed between March and August also found very few people told they have been contact with someone who has tested positive are quarantining.

The results, published as a non peer-reviewed preprint, found that only 11% of people in contact with someone who has tested positive are quarantining and just 18% of those who had developed symptoms in the past week had not left home.

Not knowing Government guidance about what to do, not identifying Covid-19 symptoms, thinking you had already had it, having a dependent child in the household and working in a key sector were most strongly associated with non-adherence.

The most common reasons for leaving the house were to go to the shops for groceries or the pharmacy, because they were feeling better and to go out for a medical reason unrelated to Covid-19.

The survey also found that of those who had experienced symptoms in the past week, only 11.9% had actually requested a test.

Overall less than half the participants could identify cough, fever or loss of taste/smell as the key symptoms of Covid-19 – a figure that remained steady over time.

Of those who reported having been alerted by the NHS contact tracing service that they had been in close contact with a confirmed Covid-19 only one in ten reported that they had not left home at all in the following 14 days.

There was a big difference in responses between actual adherence and intention to follow the guidelines.

The researchers, led by James Rubin, reader in the psychology of emerging health risks at King’s College London, said ability of the test, trace and isolate system to keep rates of infection under control relies on how well people adhere to it.

He said: ‘Policies which support people financially and practically, and providing and communicating about a testing system that is both effective and easy to access, will be key to increasing uptake.

BMA GP Committee chair Dr Richard Vautrey said preventing transmission would be key to reducing the impact on general practice and hospitals as we head into winter.

He said: ‘Self-isolation for those with symptoms, and quarantining following contact with an infected person, are essential parts of this response and must be seen as civic duties.

‘Clearer and more visible messaging from government, and stronger actions to enable compliance for those who need it, will be needed from government in the weeks and months ahead.’

He added: ‘The current self-isolation payment of £500 to those on lower incomes is insufficient and should be reviewed urgently.’

GPs have told Pulse there are lots of patients not following the rules, partly because of confusion about what they are or assume it can’t be Covid-19.

Dr Liz Pollara, a GP in North London said she has had worries about this since the start of the pandemic.

‘I’m not sure it’s lack of trust, more an inability to follow the guidance due to financial constraints,’ she said.

As Boris Gump would say, ‘ stupid is as stupid does’ ,not much hope in the UK with actions like these its going to be a long hard winter.

Well, what did you expect ?
First, people are told that most of the symptoms of Covid don;t count, you have to have both a persistent cough (like whooping cough), AND a fever over 38, AND loss of taste AND smell, but if you also have a sore throat, OR diarrhoea, OR headache, OR myalgia, OR breathless, OR sneezing, then you DO NOT need to isolate! What rubbish!
Then, anyone who DOES have Covid, well, why isolate? a) you are already infected, so you can’t avoid it now; b) the government wants everyone to catch it anyway, why else would they set up the ‘eat out to help out’ transmission-maximisation scheme?? And if it is OK for Government Ministers and rich civil servants to socialise with symptoms, why can’t I too?
Clearly the whole thing is nonsense. No wonder so many people do not even believe there is a virus any more!
if MPs can jaunt around the country, fly overseas for holidays, and breach all natural defences to infect Britian, why can’t the general population do it too???
And what is the point in isolating if you already spread it to your loved ones in the asymptomatic period; and can still go to school and work with symptoms, why can’t you go to th epub after 10pm with it? The British Public is not really so thick as to believe a virus was created by the CIA that can tell the difference between 9pm and 11pm, and has an understanding of BST and GMT.
But our MPs do.
If my washing machine was that faulty, I would throw it out and get a new one..
So why are we still using the same MPs? They are a ‘fire risk’.

Reply
Unsuitable or offensive? Report this comment
Raghib Ali: The Government needs a Plan B for Covid-19, lives and livelihoods. Here’s how one would work. | Wake Up UK 22 October, 2020 9:29 pm

[…] example, despite good intentions, only 20 per cent of those required to self-isolate are doing so, and it may be that financial incentives may be more effective in sustaining compliance with […]