‘My imprisonment won’t stop me protesting against climate change’ 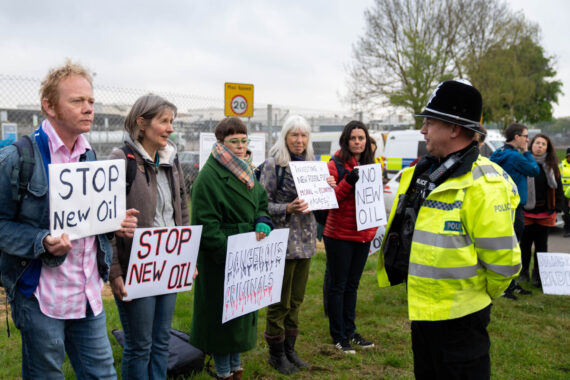 Recently, I spent a week on remand in a women’s prison. As life experiences go, it wasn’t as unpleasant as I’d expected, and I don’t regret the actions that got me there. It provided some powerful insights into how things work when you’re at the wrong end of a significant power imbalance – rich material for reflection.

So how did someone who’s always been a bit of a conformist goody two-shoes and respectable GP with 32 years unblemished NHS service come to be in that situation? The simple facts are that I repeatedly broke a High Court injunction forbidding peaceful protest at an oil depot – by standing on the grass verge of a public road with a placard, and then sitting down in the entry road. Along with ten others, I ended up in prison because I made clear to the judge that I felt no remorse and had every intention of returning to do the same again.

The more in-depth explanation is this. We’re in the midst of a climate and ecological emergency unravelling, and if you doubt the urgency of the situation – never mind the meticulously researched and referenced outputs of the IPCC – just look up what’s currently happened in the Indian subcontinent this year.

Temperatures there were close to 50 degrees for weeks on end and fridges and air conditioning don’t work (if you’re lucky enough to have them) due to heat-induced grid collapse. All of this was in Spring.

Leaving aside the inhumanity of ignoring the plight of those at the sharp end of the climate crisis, consider a predicted 50% loss of grain harvest, on top of global food chain pressures from events in Ukraine, and it seems less than far-fetched to imagine bread aisle fights  in UK supermarkets. When food, water and a safe home become impossible to access, then mass migration, conflict and societal collapse follow. It’s as simple as that.

I’ve spent years worrying quietly about this, watching the predictions of climate scientists get ever more terrifying, and trying to shrink my personal carbon footprint (I’m vegan; don’t fly; I share an electric car or use public transport; have insulation and solar panels and a heat pump; and so on). I’ve complained politely via petitions, voted and supported Green Party campaigning and Greenpeace, and yet mostly avoided the topic with family, friends and colleagues because it feels like preaching, or feels pointless because it’s too scary to talk about properly.

Unfortunately, it’s becoming clearer by the day that our Governments and leaders don’t have this in hand, and ‘world-beating’ pledges such as to be carbon neutral by 2050 won’t keep us safe – especially as we’re so far from meeting them on our current emissions trajectory. The Meteorological Office recently stated that we have a 50% chance of breaching 1.5 degrees global heating in the next five years.

The tragedy is that solutions are out there, and the demand of the Just Stop Oil protest I was part of was simply that our Government take the first basic step of turning off the fossil fuel tap. Not stopping oil use overnight and leaving folk to freeze, but committing to halting all new fossil fuel licensing and production, and a rapid but humane transition to green energy over the next eight years using the reserves we already have.

This should have happened years ago but, instead, the greenwash has swirled in torrents to the tune of: ‘it can’t be done’, ‘it costs too much’, or ‘we’ve got this sorted’. None of which are true.

So what am I to do to make what I do as an individual count with the extreme urgency needed to avert a ghastly future for my children (and everyone’s)? Knowing that a public health catastrophe of horrific proportions is coming down the road, how can I not act, and how should I act to make best use of my privileged voice and position?

Historically, non-violent but sometimes disruptive action isn’t popular at the time, but over time has had the best chance of changing things. Think Gandhi, the American freedom riders, the non-violent suffragettes…

This, and this alone is why I’ve broken the law and will continue to do so until either our leaders start acting like they believe in the climate emergency that they declared over three years ago, or until a better way becomes apparent. To be clear, the latter refers to a way of getting things moving on the all-out effort and war-like footing needed to tackle this situation (think the Covid response plus), and not to, for example, the gentle greening of the NHS which while an extremely laudable initiative is just not enough.

People have described me as ‘brave’ (plus a range of less complimentary adjectives) for what I’ve done, but also expressed concern for the effects on my career, family and wellbeing. It’s much easier to act brave when you feel desperate. Rather, the really brave are those who speak out from a less privileged position in society; from a position of precarious finances; in the face of active opposition from their loved ones; and those who speak out in parts of the world where prison means real danger and hardship.

As for my career  – I chose to resign from my job in March because I just can’t cope with the stress of it anymore, and I don’t want to end my time with a terrible mistake, or just walk out through a sudden inability to cope. I’m not sure what comes next, but being a doctor remains a core part of my identity and I don’t want to give that up without a fight.

The GMC investigated me for several convictions arising from environmental activism and closed my case with a letter of advice last year. A new investigation is ongoing, and I’ll defend myself as best as I can against any case of bringing the profession into disrepute since I feel that mine is an ethical stance in a situation of hitherto unprecedented threat to life and health.

For the wellbeing of my family and myself, I’d rather not be doing these things, but if the alternative is to stand by and pretend that all will be well, and hope someone else will do it for me, then I cannot and will not stop.

Dr Sarah Benn recently stopped working as a GP in Birmingham. She is holding the ‘Stop New Oil’ card in the photo

A catharsis on Pulse does not legitimise these actions.
What a waste of time and effort.

After watching your ilk and the ill informed shenanigans that only the privileged in the first world can exercise, I realised the effect your playtime is having on decent folk trying to get their job done. Have you been to protest in India and China? Thought not. Why? Because bullies are at heart cowards.

A very stupid thing to do.
Well done for now having a criminal record.

Sad and rather pathetic comments. Well done for have the courage to stand up for your convictions. For a noble cause that will not benefit you in anyway, but only the generations that come after you. Well done for sacrificing your own well being in the aid of others. And
bravo for doing something most would be too scared to do. And of course, 2 fingers to the GMC and all of their ilk.