Profiled: The two nominees for chair of the BMA GP Committee 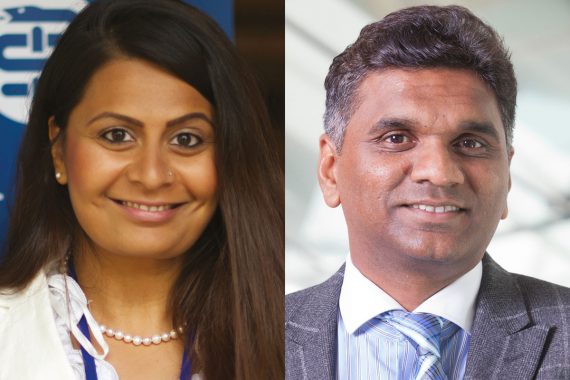 Pulse takes a closer look at the two nominees for the next chair of the BMA’s GP Committee England, who will succeed Dr Richard Vautrey and be voted in at the GPC England meeting on Thursday 18 November.

Dr Vautrey this month announced he was standing down from the role he had held for four years.

Chair of Camden LMC, Dr Farah Jameel became the youngest negotiator on the BMA GP Committee’s England executive team when she was appointed in 2017 at the age of 34.

She was one of the four executive team members of the GPC who negotiated the landmark five-year contract.

She has been leading on workload issues for the GPC, including changes to the NHS standard contract to prevent secondary care from dumping workload on general practice. As a member of the executive team, she supported work on IT, leading on the BMA’s successful campaign to delay the controversial ‘General Practice Data for Planning and Research’ scheme, labelled a ‘data grab’ by campaigners.

Dr Jameel has also supported the GPC’s clinical and prescribing policy group, where she turned her attention to issues such as how referral management systems are rejecting GP referrals following an outcry from GPs on social media.

A London based sessional GP, Dr Jameel completed her GP training in 2013. She was featured that year in the GP trade press as a top up-and-coming GP and also won an award for effective leadership. She has since, in 2014 and 2015, been named as one of the top 50 most influential GP’s. Born and raised in the UAE, she relocated to the UK for postgraduate training.

She was previously a council member at Medical Women’s Federation, deputy chair of the BMA’s Equality and Inclusion Committee and a national executive member of the British International Doctor’s Association. She is also former Chair of the South Thames Regional Junior Doctors Committee in 2012 and was a member of the British Medical Association’s UK Junior Doctors Committee between 2010 to 2014. She has been involved in medical politics since 2009.

Dr Jameel enjoys working with grassroots, new and senior members, listening to and vocalising the concerns shared by the profession, in the right fora. A strong believer of the NHS and its core principles, she has consistently fought to maintain and improve working conditions and patient care. Being a BME woman and an international medical graduate, she has a keen interest in ensuring equality and fairness is extended to all. She has a special interest in Dermatology and occasionally writes for the GP trade press.

Dr Jameel would be the first female GPC chair were she to win.

Born in India in 1975, Dr Chandra Kanneganti studied for his Bachelor of Medicine and Surgery at Guntur Medical College. After moving to the UK in 2002 to work as a doctor in the NHS, he became a GP in 2006 and has worked at Goldenhill Medical Centre as a senior partner since 2007.

He also manages Middleport Medical Centre in Stoke-on-Trent and has been on North Staffordshire’s LMC since 2015, where he is currently secretary. He is chair of the British International Doctors Association and the BMA GPC’s policy lead on NHS England. He is also a GP trainer and appraiser, clinical lead for NHS Practitioner Health, former North Staffs GP Federation chair and has been a CCG clinical director.

Dr Kanneganti is a Conservative councillor in his home city of Stoke-on-Trent, for which he is also Lord Mayor. Cllr Kanneganti has served as Deputy Lord Mayor since July 2020, and was first elected back in May 2019.

He has consistently championed the rights of international doctors, including in the aftermath of the case of Dr Hadiza Bawa-Garba in early 2018. Immediately after the High Court ruled in the GMC’s favour to strike off Dr Bawa-Garba from the medical register, Dr Kannegati joined the campaign to have her reinstated by writing an open letter as chair of the British International Doctors Association. The campaign was successful, with the Appeal Court overturning the High Court’s decision.

Since then, he has raised his voice on race equality issues in medicine, calling on the CQC to investigate links between practice ratings and ethnicity, after it was found that at least 60% of GPs at inadequate practices are from a BME background.

Dr Kanneganti was at the forefront of the BMA’s response to the GP Forward View. When it reached its second anniversary in April 2018, the BMA challenged NHS England on its delivery of ‘transformation’ funding. A freedom of information request by the BMA to CCGs found that a fifth had given less than half the required £3-per-head funding this year and some 6% allocated nothing at all in 2017/18.

How can an active Conservative councillor possibly run for the chair of a committe of what is essentially a trade union?

Reply
Unsuitable or offensive? Report this comment
Hello My name is 12 November, 2021 11:05 am

Ideally the BMA should be apolitical, but this will require it to have leaders who sit on both sides of the UK’s political divide. His Conservative role need not prevent him from robustly challenging NHSE and government. Sarah Wollaston was able to voice concerns about decisions made by her own party (at the time).

Surely there is clear conflict of interest – One tory working with another tory ( SJ) who has no respect for GPs.

No Brainer who should be elected?

In the interests of diversity, are there any non-Asian applicants to consider?

Farah and Chandra – good luck to you both!
You are already featuring on the Mailonline !!

Please no N Kanani 2.0 or a tory councillor

Interesting, though only of academic interest, since the actual decision will be taken by the small secretive GPC. The argument goes that clinical GP’s such as I was, lack the political insight, to make a decision in this matter

This is a post, not a job, there is no list of requirements, targets, any requirement to produce a plan, no timescale, and no audit of appraisal. The result will expand the cv of the post holder, but there is no requirement to actually achieve anything. This is authority without responsibility, one of the hallmarks of institutions, particularly degenerate ones.

The end result however will be a contract, which clinical GP’s will be contractually obliged to deliver, this is responsibility without authority. They will face the fury of irate patients, for their failure to deliver a contract that they failed to have a say in negotiating. Viewed from this, the patient, perspective, who is to say that patients are not justified.

Keep any Tory out of a doctor trade Union.

“Keep any Tory out of a doctor trade Union”

This sort of bigotry might well explain why the BMA has become an irrelevance.