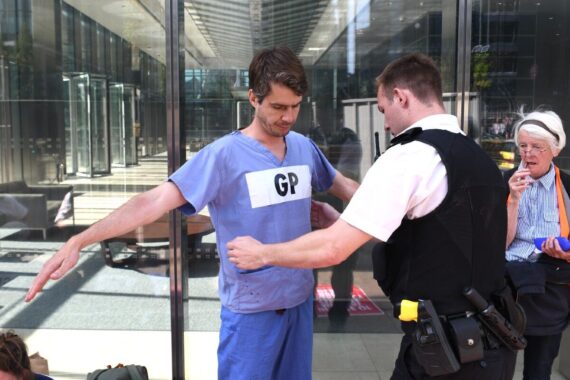 The GPs were among six healthcare professionals who were arrested on Sunday after cracking eight panes of glass at investment bank JP Morgan’s offices in Canary Wharf as part of a non-violent protest, according to XR.

The group from Doctors for XR included GPs Dr David McKelvey and Dr Patrick Hart, a child and adolescent mental health specialist, a gynaecologist, a consultant psychiatrist and a dementia nurse, it said.

XR announced yesterday that the group was ‘released from policy custody’ on Sunday evening, after being held since that morning, but remain ‘under investigation’.

It said: ‘The medics placed stickers on the windows reading “in case of medical climate emergency break glass” before carefully cracking the panes of glass near the entrance to the building.

‘Special care was taken to ensure the safety of any staff and passersby present during the action. All six health professionals were arrested by police shortly after the action.’

It added: ‘The act of non-violent civil disobedience comes in response to the British Government declaring the nation’s first-ever level 4 national emergency heat red alert this week, ahead of predicted temperatures of 40 degrees celsius today.’

XR pointed to Office for Health Improvement and Disparities (OHID) guidance published in May, which said that ‘health and care professionals should recognise the climate crisis as a health crisis, and therefore climate action as a core part of their professional responsibilities’.

Dr McKelvey, one of the GPs who took part in the action, said: ‘This is the fourth time I have joined Doctors for XR in an action focusing on JP Morgan’s continued new investment in fossil fuels.

‘Today we do not lightly engage in breaking a pane of glass in the mighty JP Morgan glass tower; it is done thoughtfully, carefully and with accountability. Nothing else seems to have let the light in – hopefully this crack will, for the sake of all our health.’

And Dr Hart added: ‘When a patient gets sick, the first thing you do is stop the harm. There is no point in administering an antidote to a patient while someone is still pumping poison into their body.’

He said: ‘If we want to be healthy, we need a planet and a climate that can sustain life, and right now, the choices that are being made in this building are creating life-threatening conditions for all of us – conditions that I cannot treat.

‘I want to help my patients live healthy lives, but the choices being made in this building are preventing me from doing so.’

XR announced last month that a GP and medical student had been ‘found not guilty’ after spray painting and super glueing themselves outside JP Morgan in Canary Wharf in September last year as part of a Doctors for XR action to demand banks stop funding fossil fuels.

The case’s judge Ross Johnson said that ‘although their arrest was necessary to bring the offence to an end and allow for the property to be restored to its former state’, the protest was ‘not violent’ and a ‘form of political expression of considerable importance’.

He added: ‘​​The words written were deliberately quoted from a report on climate change and designed to highlight what they genuinely considered to be the extreme threat posed to humanity and the need to act urgently to avoid catastrophic loss of life.’

The UK is currently facing an extreme heatwave at the same time as a spike in Covid cases that saw one in 19 people infected with Covid in the UK earlier this month.

Experts have warned that thousands of people in the UK could die as a result of the record temperatures, according to reports.

‘My imprisonment won’t stop me protesting against climate change’

Caring for patients and the planet

No idea why this is news or who plugged it. Sadly sounding a bit Daily Snail.