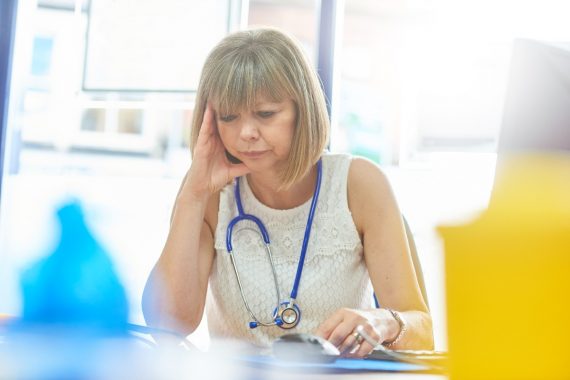 Exclusive A GP and two practice staff members were barricaded into their surgery for over two hours earlier this month while awaiting the police’s response to a violent patient, Pulse has learned.

Dr Elliott Singer, Londonwide LMCs medical director and East London GP partner, told Pulse that the patient was trying to ‘kick the front door’ down to enter the small practice in Redbridge, east London – which wished to remain anonymous – after it had closed on Friday 1 October.

He said that two receptionists and a GP were stuck inside the building for over two hours waiting for the police who never turned up, despite a 999 call around 5.30pm.

‘Eventually it was about 8pm that it was calm and [the staff] were able to leave the practice’, Dr Singer said.

He told Pulse that he spoke to the patient himself and had him seen by the out-of-hours team to sort out his prescription, although the patient ‘never even picked it up at the end’.

The patient had been removed from the practice list five or six weeks ago due to a ‘breakdown in the relationship’, Dr Singer said.

He added: ‘From a police viewpoint, the staff weren’t in imminent danger. Even though that meant that the GP and two receptionists were unable to leave the building for quite a long time, they were safe within the building.

‘It’s still not pleasant. We need to work closer [with the police] to maintain safety for GPs and their teams.’

Meanwhile, other accounts of police failing to attend incidents with violent patients during the pandemic have been reported by the BMA’s The Doctor magazine and the Independent.

Staff at one GP practice in London was reported to have received abusive messages ‘on text, via email, by phone and in person’ from patients, including an anonymous letter threatening that ‘all medical practitioners, doctors and nurses’ would be put ‘on trial and held accountable for war crimes’ for delivering Covid vaccines.

‘This was photocopied numerous times and put in envelopes and individually addressed to each of our clinicians and posted through the door after dark’, an anonymous staff member told the BMA.

‘I reported this to the police and our CCG but [got] no response from the police’, they said.

Staff at another London GP practice were confronted by an ‘aggressive’ and ‘well-built, 6ft 5in tall, male patient’ who ‘threw something at staff over the reception desk’, according to the BMA.

On another occasion, a different patient shut themselves into and then ‘destroyed’ the same practice’s toilet, it said.

The practice manager called the police both times, but no officers attended, it reported.

‘I called the police and asked them to come out and told them that the only people in the building were four female members of staff,’ the practice manager told the BMA.

‘[The police] said they didn’t have the resources to send anybody out while all we could hear was stuff [inside the toilet] being smashed.’

Pulse approached the Metropolitan police but it was unable to comment on the incidents.

It comes as NHS England has said GPs will have access to a £5m security fund as part of a new campaign to tackle patient abuse.

The funding can be used for security enhancements GPs ‘think they might need’, such as ‘panic buttons’ or CCTV, according to the health secretary.

The move, which comes amid soaring levels of confrontational and aggressive behaviour from patients, forms part of NHS England’s package of support for GPs announced last week.

It follows a GP practice in Staffordshire being forced to close for two days earlier this month after staff felt compelled to walk out due to verbally abusive behaviour from patients.

And a man charged with assault after attacking and injuring four GP practice staff in September is due to appear at Manchester Crown Court next week.

The most effective way to remain safe is to resign or hand back the GMS contract and then retire or find better work elsewhere . Personally I have resined and intend to ski/sit out the winter while I plan my move to another country where GP,s are respected and better pain .

Should have left Poor Britain by next Spring

I can’ say that I blame you : I wish you the very best of luck and thanks for all that you did.
Few others will thank you.

The UK is the laughing stock of the world – and an embarrassment on all fronts; warped privilege soon creates anarchy and unrest. The best bit about all this – is that your value as a GP (although you can’t see it) is going up, globally – other countries will come and take you, like the UK goes and steals others workforce. Other countries invest in primary care and respect them as it is effective and cost-saving.
What a silly leadership plan – lose the staff you need.
Imbecilic.