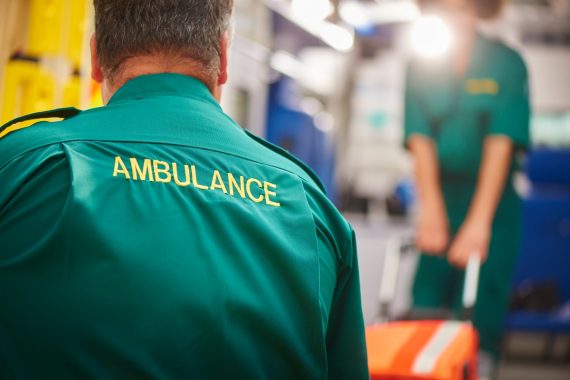 A 59-year-old man has been charged with assault after attacking four staff members at a GP practice in Manchester on Friday afternoon.

Two of the victims were hospitalised with head injuries following the ‘disturbance’ at Florence House Medical Practice in Openshaw in Manchester.

Dr Tracey Vell, chief executive of Manchester LMC, reported on Twitter that one of the GPs suffered a skull fracture and practice staff were left with ‘deep lacerations’ following the actions carried out by a ‘patient’.

‘He has been remanded in custody ahead of an appearance at Manchester Magistrates Court on Monday 20 September, 2021.

‘Police were called at around 12.30pm on Friday (17 September 2021) to a report of a disturbance at a surgery on Ashton Old Road, Openshaw, Manchester.

‘Four members of staff were injured in the incident.’

NHS chief executive Amanda Pritchard said she was ‘sad’ to hear about the incident: ‘This is never acceptable. Wishing the victims a swift recovery.’

Health secretary Sajid Javid said on Twitter that violence against health staff is ‘unacceptable’ and that the Government is ‘doing all we can’ to protect staff from abuse.

But GPs replied to the Tweet frustrated with a lack of Government action. Others suggested the onslaught of criticism in the media is causing attacks such as this.

Dr Manisha Kumar, a GP in Manchester, said she was brought to tears and that it was the ‘third incident in Manchester’ last week.

She said: ‘People are scared. The abuse is horrific in the media.’

A message on the surgery’s website said: ‘The practice and website are temporarily closed due to an incident. We apologise for any inconvenience and will reopen as soon as we can.’

BMA GP committee chair Dr Richard Vautrey said in response to the attack: ‘We are truly horrified to hear about this awful attack and our thoughts are with the GPs, practice staff, families and patients who have been injured and affected in this dreadful incident.

‘While the specific circumstances need to be investigated by the police, this assault, though one of the most extreme, is part of a terrible trend of growing abuse, vitriol and violence that is being directed towards our healthcare workers.’

Dr Vautrey added: ‘The Government and NHS England must act, and fast, before yet more incidents of this severity occur.’

It comes as GP leaders linked record numbers of GPs seeking mental health counselling to the ‘current vitriol and unfair attack against GPs’ in the media.

Nearly three quarters of GPs are experiencing increased levels of patient abuse compared with before the pandemic, a Pulse survey revealed.

The Doctors’ Association UK wrote to the Independent Press Standards Organisation (IPSO) this month to report Telegraph columnist Allison Pearson for breaching the Editors’ Code of Practice with ‘inaccurate’ articles in which she suggested GPs are ‘hiding’.

It follows a racially motivated attack on a Lincolnshire GP who ‘nearly lost his sight’.

A shocking survey from the BMA found that more than half of GPs have faced verbal abuse from patients or those accompanying them in the last month and one in five has been threatened.

There is a “case” against the media for Part 2 of the Serious Crime Act 2007, sections 44 to 46, where three inchoate offences are of intentionally encouraging or assisting an offence.

Health secretary Sajid Javid said on Twitter “…..doing all we can’ to protect staff from abuse. ”
UTTER BULLSH*T!

Recover well.
And if that was a politician? The outcry would be immense, or not.

‘’NHS chief executive Amanda Pritchard said she was ‘sad’ to hear about the incident: ‘This is never acceptable. Wishing the victims a swift recovery.’
Health secretary Sajid Javid said on Twitter that violence against health staff is ‘unacceptable’ and that the Government is ‘doing all we can’ to protect staff from abuse. ‘’

(1)’Sad’ , seriously ?
Is that even the right sentiment to go on public ?
(2) This is no ordinary scuffling but serious injuries.
(3) Of course , police investigations to follow but is the health secretary not bound to consider an inquiry of the whole big picture and phenomenon with potential serious ramifications on safety of all NHS staff ?

Sajid Javed says government is doing all. What are those all?

Obviously, the details of this dreadful incident haven’t yet been released or what was going through the man’s mind to make him do such an absolutely horrific thing. But regardless the media GP bashing has to be stopped immediately by the government – Sajid Javid is currently supporting the Daily Mail’s campaign.

The public need to be told that the truth in no uncertain terms at all that there are severe staff shortages and surging workloads and that it’s the government’s responsibility to solve these huge problems.

GPs are doing amazingly well battling on despite the government not having solved the underlying problems which are making GP practice staff’s jobs so incredibly difficult.

Thank you ‘The Times’ for reporting reality today
https://www.thetimes.co.uk/article/covid-in-scotland-gp-appointments-by-phone-are-here-to-stay-bftczdq2v

Hoping so much that the four staff members all make a full recovery!!

The aim for all your careers should be to refer as many patients into hospital as you can.

Our wonderful AÑP Sally has written this response to the Daily Mails front page a few days ago….and sent to number of major papers etc, which I thought I would share.. .

Good Morning
Yet again your front page has a headline and story enticing further hate and disgruntlement against GP practice staff. I can only assume you have no idea what it is like to currently work in a GP practice. Let me enlighten you. Firstly, can I inform you that a GP does not work alone but with a multi-professional clinical and administration team to provide and support patient care. So no someone may not be able to see a GP but that’s because the GP is not the most appropriate person to see. Secondly, many issues can be diagnosed and managed by telephone or remotely. Previously there were no means to submit histories and photos other than a face to face appointment but now there is so why should primary care not embrace digital innovations as other areas of business have? Third, prior to covid the workload was sustainable, just. Primary care then had to quickly change and adapt to new ways of working which it did as advised by government. Covid has not gone away and so reverting back fully is not possible. It has also provided an opportunity to assess if there are better ways to manage patient access so that the sickest are seen promptly and appropriately. I frequently see patients and ask why they did not come to see me sooner. The reply is that “ GPs are not seeing anyone”. On asking if they have tried to get an appointment I get “No” with the previous reason cited. When I ask who has told them they cannot get an appointment I get told “the newspapers”. I am aware in some circumstances especially in densely populated areas patients have had difficulty getting an appointment but often this has been a long term problem. Primary care is underfunded, there are less doctors doing GP training than ever before. Why would you train to come into this current climate of constant abuse? Fourth, Primary Care Networks were tasked with rolling out the Covid Vaccination Programme which started long before the mass vaccination centres started. This was run by clinicians and administration staff who were still having to do their normal jobs. The volunteer workforce needed training by these same staff still working their day jobs and doing the vaccination clinics. The goal posts constantly changed and now we have the upcoming covid boosters yet again heavily involving Primary Care Networks. Fifth, we are human too and despite being in the early cohorts for vaccination many Primary care staff have had covid or had to self-isolate due to a covid contact. There is no back up work force so no staff equals no appointments and reduced patient access.
I understand that there is, and should be, a culture of free speech but the current representation of General Practice by the Daily Mail is vitriolic and harassment of a service on its knees. Where are the front pages about waiting times for hospital appointments, even those sent as a Fast Track? Where is the barrage of comments about hospital consultants still having telephone clinics? Where are the comments about other areas of business not running as a client would wish them too such as banking and solicitors?
The constant trolling by The Daily Mail means that I often spend a proportion of a valuable face to face appointment with a patient expressing unwarranted negative comments about primary care. I then over run as the patients presenting problem still needs assessing, diagnosing and managing with a mutually agreed treatment plan which all takes time. The following patients are then inconvenienced.
In 2020 there was a lot of clapping for the NHS, I am sure many of your journalists partook in this and likely reported on it. Those claps now feel hollow and worthless.
So how can the situation be improved? Well todays front page story reads that The Daily Mail is campaigning to improve access to family doctors. Does this mean that as an organisation you are going to fund training for new and retainer GPs along with other clinicians within the GP team? Does this mean you will raise the profile of Primary Care so once again it becomes an attractive area of medicine and nursing to work in? Does this mean you will present a balanced view of Primary and Secondary care and the challenges presented? Does this mean you will accept positive as well as negative patient experiences and report on them because currently this does not appear to be the case?
I look forward to reading about the realistic and practical innovations your campaign to improve access to family doctors presents.