One in three doctors suffer abuse from patients during pandemic 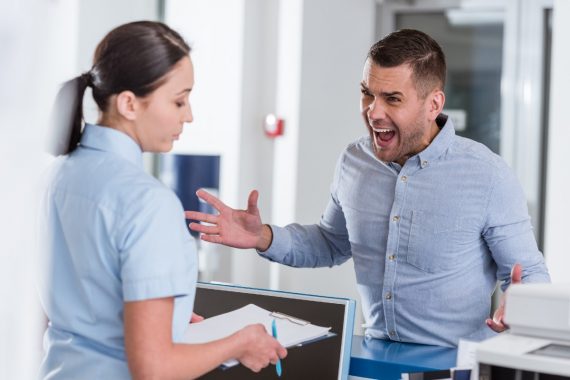 More than one in three doctors have suffered verbal or physical abuse from patients or their relatives during the Covid-19 pandemic, a medical indemnity organisation has revealed.

GPs taking part in the Medical Protection Society poll said patients lashed out at them because they believed practices were closed, while others said they were blamed for changes to national guidance.

The findings, published today, come from a new survey of 1,250 UK doctors by the MPS, which ran from 17 September to 16 October.

It found 35% of respondents had faced verbal or physical abuse from patients or their relatives during the pandemic, while a further 7% have experienced abuse from the public while outside a medical setting.

Pulse has also spoken separately to a GP at a practice in Suffolk that recently had a note posted through the door saying ‘where are the f*cking doctors?’. It closely follows a similar attack in Bristol.

The GP in Suffolk, who wished to remain anonymous, said the practice had received an ‘unprecedented number of complaints’ about new systems in place involving temperature and symptom checks, which had been advised by NHS England.

Practices facing abuse: ‘I am almost at the point of quitting’

The recent controversy over whether or not practices have been open to the public was a key theme for respondents, with one telling the MPS a patient claimed ‘Boris Johnson told you to see me’.

They said: ‘We are being blamed when guidelines change and accused of failing in our duty of care. It’s been really tough – [I] hate feeling like GP land is the kick bucket for the NHS.’

Another added: ‘One patient said to me, “It’s alright for you, your job must be a doddle now that no patients are coming to the surgery. We are being treated like animals whilst you all sit in your ivory towers with nothing to do”. Public perception is frustrating – we have never been busier.’

One GP said: ‘The most upsetting [thing] is patients believing that we haven’t been open – we are all on our knees in general practice and it doesn’t look like it’s getting any better.’

The MPS survey also revealed the abuse is causing some doctors to question whether to continue working in their profession.

It comes as GPs called for ‘more support’ from NHS England after another practice was attacked with anti-GP graffiti last weekend – an incident they linked to GP bashing in the mainstream media.

NHS England’s primary care medical director this week joined the outpouring of support for the GP practice which was vandalised.

The MPS said the findings are ‘deplorable’ and called for ‘more concrete’ funding for mental wellbeing support for doctors and their colleagues.

‘While this is a frustrating and extremely stressful time for the public, it is sad and deplorable to think that one in three doctors who go to work every day in the most challenging circumstances, putting patients first, face abuse – [and] not only in their place of work.’

She added: ‘This presents yet another source of anxiety for doctors at a time when many have expressed grave concerns about their mental wellbeing.

‘Without support to address an array of mental wellbeing concerns – including those caused by verbal and physical abuse – doctors are at risk of becoming disillusioned or will suffer in silence with psychological injuries – both of which put the safety of themselves and their patients at risk.’

NHS England landed itself in hot water last month with a ‘reminder’ to practices to offer face-to-face consultations despite the ongoing pandemic and its own ‘total triage’ advice.

An open letter from grassroots GPs highlighting the profession’s concern about ‘inaccurate and harmful’ media messages about access to care this month received over 400 signatures.

The BMA has reported almost three-quarters of GPs feel ‘anxious’ about work during this autumn and winter as mental health issues among GPs are on the rise.

NHS England’s primary care medical director this week told GPs and their teams they are ‘valued and appreciated’, as new figures revealed the reality – a sharp increase in the number of GP consultations last month.

Nothing new here. In recent years GP practices have been…..
– flamed on Facebook
– chastised on (nhs) Choices
– excoriated on email
– trashed on Twitter
– insulted on Instagram
– moaned at on Mumsnet
– smashed on social media
– assailed by appraisal
– skewered by CQC
– rebuked at reception
– torn into on telephone
– gutted by government
– pummelled by patients
– punished by the press
– reproached by our representatives
– scorned in surgery
– set upon by the self-entitled
– pilloried by PALS
– criticised by CAMHS
– unappreciated by the ungrateful
– (etc)
– and now, grief by graffiti! Well at least it’s novel……

Yeah but………..the clap for carers???? The GP glitterati told us it was sufficient??

Fuelled by the government and NHSE who are very willing to use us as scapegoats for their own failings.

Curiously not a problem in private practice; time to dump the NHS?

How about
– Shat upon by secondary care