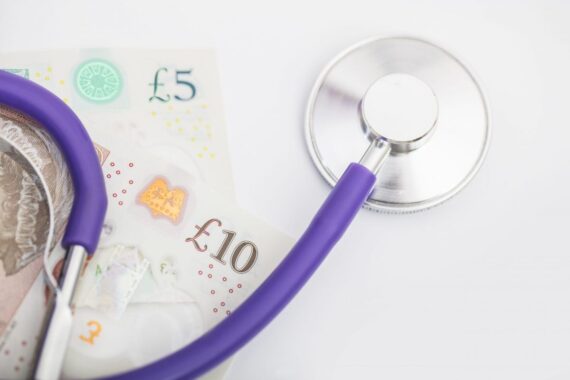 NHS England has warned that it may need to make cuts to primary care funding if staff is awarded a pay rise of above 3% and it is not given more money to pay for it.

Investment in cancer services and community diagnostic centres could also be hit, it said.

It comes as the Government has yet to announce its final decision on this year’s NHS pay uplift.

NHS England chief financial officer Julian Kelly made the comments at NHS England’s board meeting last week, where he said that the pay settlement is a ‘significant issue’.

He set out that NHS England was ‘funded for a maximum settlement of 3%’, but raised concerns about the implications of ‘inflation running high’.

Mr Kelly said NHS England is ‘supportive of the right settlement’ for its staff, especially in the ‘current context’ with ‘cost of living pressures’.

But he added: ‘Nonetheless, if it’s higher than the 3% and if we are living within the money we would currently have, that would entail very real decisions for us about what we would stop.

‘Every percentage point that is over the 3% costs the NHS somewhere between £900m and a billion pounds.’

He told the board that NHS England has already ‘emptied the coffers’ to ‘fund big inflationary pressures’ and faced ‘a cut to the original NHS settlement’ to fund ‘other pressures’ such as Covid testing.

He said: ‘We have, so to speak, emptied the coffers, we’ve already had to reduce the investment we are making into some of our programmes by about £800m already.

‘So we would then be looking at having to cut back on investment in our major areas, when our major areas are primary care, cancer care or indeed, at the margin, some big capital investments – in fact, we were just talking about the diagnostic centres.’

He added that NHS England is facing a ‘very stretching position’ and that it is ‘not realistic’ to ask local commissioners to ‘just do more efficiency’.

He said: ‘We wait to see what the Government decision is. But as I said, a pay settlement higher than 3% and no extra money would entail some really difficult decisions.’

When approached by Pulse, an NHS England spokesperson said that Mr Kelly was referring to the impact on future investment.

Also speaking at the meeting, NHS England chief executive Amanda Pritchard told the board that a sufficient pay rise for NHS staff is ‘not just essential’ but ‘an operational necessity’ to retain staff.

She said: ‘It is not just essential that the work of frontline NHS staff tackling the pandemic [and] recovering services is properly recognised and rewarded, it is also an operational necessity.

‘If we are to retain the staff that we need to make further inroads into long waits [and] deal with all of the operational pressures we’ve just discussed, then we have to be really clear that the right pay for our staff is a critical component to it.’

She added that NHS England has to give ‘really clear advice’ to the Government on the issue and has a ‘duty to be clear about implications and consequences’.

An operational report presented to the board said health systems were already finding savings of more than £5.5bn but against a backdrop of a real-terms cut in funding of 1.8%.

Any further ‘savings or efficiencies’ in response to pressures around pay, inflation or new demands on the service are ‘not credible’, the report concluded.

It reiterated that the NHS was funded for a 3% pay settlement this year, but there have been suggestions the pay review body could award a 4% rise.

Even a 1% increase on top of the planned 3% would need to be absorbed through ‘cuts’ to services such as planned elective care or a reduction in ‘investment to improve services’ such as IT or in ‘capital to maintain essential services’, unless additional funding was made available, the report warned.

GP partners remain excluded from the Review Body on Doctors’ and Dentists’ Remuneration (DDRB) recommendations due to the five-year contract currently in place.

Meanwhile, the Office for National Statistics (ONS) this week said that a ‘large rise in GP appointments’ was a main contributor to UK economic growth in May.

ONS: Rise in demand for GP appointments pushed up GDP

They are at it again – Divide and Conquer !
There is plenty of money. Doesn’t Rishi Sunak have a spare 800 million pounds ?
Hold out for fair funding AND pay rise consistent with MPs’ income.

The two should not be linked surely they realise a valued workforce will work harder !

Great opportunity for NHS England to sacrifice itself for the common good and redistribute their salaries to those that deserve it.

Let’s turn this around.

“NHS England has warned that to maintain current primary care funding GP staff should take a reduction of 8% in pay.”
(Assuming inflation of 11%)

All those in favour?
(COI pensioner getting the full inflationary uplift. If me why not the workers?)

why cut PRIMARY care funding ? wrong way to do it ! a small cut in SECONDARY care funding (who eat over 90% of the budget), would achieve far more savings, besides – secondary care has not yet returned to normal working, while primary care has (almost).

but of course – you wouldn’t want to upset all those specialists, would you !!

They haven’t got a clue. Secrets. Lies. Deception. And a sell-off. CQC shutting down practices still. And all they are planning, is more feedback on YOUR performance. Comics / cartoons.

@David Jenkins – when Primary Care does get back to normal, ie by ceasing having to do large tranches of Secondary Care’s workload then we will have more time to spend on our core work. I am currently complaining to our local trust about a 2 week wait referral that was delayed by 8½ weeks because the MDT did not act on the original scan that showed a suspicious lesion but chose to write to me non urgently to ask me to do the referral (which I did the same day) then chose to write again to ask me to refer on 2WW pathway to a different MDT when they decided it was not their speciality. There will be a lot of upset specialists when my complaint is received, and deservedly so. What hope when such blatant inefficiency and ignorance exists?
If we were free to work efficiently and were fully manned, which presupposes properly paid, we could perhaps regain the past position when GP was a massively productive speciality in its own right rather than simply regarded as a second rate support service for 2° Care

We need a shiny new diagnostic centre much more than primary care staff!

And puppies and kittens will have to die

Reply
Unsuitable or offensive? Report this comment
Turn out The Lights 19 July, 2022 8:13 am

Another sub inflation rate rise in funding will carry on the cuts tat have been happening for the last 15 yrs, but probably speed them up.

you need to protect yourself. explain to the patient that the delay in being seen is NOT down to you. give them copies of the hospital’s refusal to see them, or act upon your request. let the PATIENT complain. much more effective than you doing so (but by all means stick your oar in as well !) otherwise you run the risk that the local trust will take the attitude “it’s that bloke greenish again – he’s always moaning”

i’ve always found getting the patient/family involved shakes the trust up more !

David Jenkins. Thank you and yes I do moan though my usual response is to direct patients to PALS but this instance is so complex and egregious that it is also being copied to CCG Quality Assurance team at their request and I do not think the patient/family would understand the intricacies of the system sufficiently to make as forceful a complaint as I have.
Provided we ourselves maintain the highest standards we are entitled to complain about underperforming hospitals