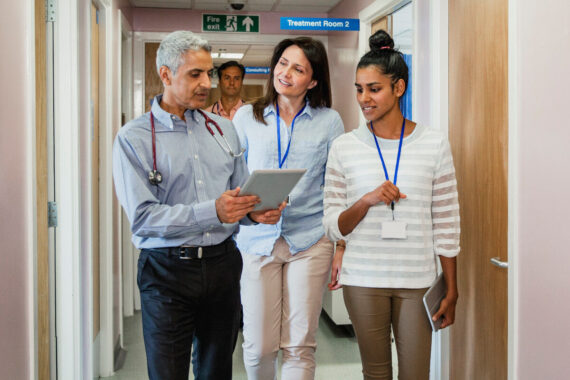 The number of general practice clinical staff who are not GPs or nurses could nearly double by 2030 if current trends remain consistent, while the GP shortfall is expected to more than double.

To make up the shortfall, in line with current policy action focused on PCNs and the additional roles reimbursement (ARRS) scheme, the number of direct-patient care (DPC) staff (excluding GPs and practice nurses) could grow from around 25,400 FTE in 2021/22 to 55,300.

The Health Foundation projections also set out an ‘optimistic’ scenario where DPC staff could grow to 72,000 in the same time period if ‘additional policy action facilitates increased use of a bigger and broader general practice workforce team’.

But it warned that if the PCN and ARRS initiatives fail to realise their potential, with no further workforce measures put in place beyond 2023/24, the number of DPC staff could reach only 40,000 by the end of the decade.

This ‘pessimistic’ scenario would also see the Government fail to deliver on its manifesto pledge to hire 26,000 additional general practice staff by 2023/34.

The projections anticipate that the Government will also fail in all three scenarios to deliver on its pledge to deploy 6,000 GPs by 2023/34.

The Health Foundation said its projections ‘highlight the inherent uncertainty’ in how DPC staff numbers will grow beyond 2023/24, given ‘the current lack of integrated workforce planning across general practice’.

It warned that its worst-case scenario would see the ongoing policy push towards multidisciplinary general practice teams falter after this point, with newer ARRS-funded recruits ineffectively embedded in their team, leading to increased staff turnover and vacancy rates overall.

Practices and PCNs ‘need support to manage organisational and team working changes’ as they become more multidisciplinary, it said, including more effective supervision and greater clarity on non-clinical work staff are expected to take up.

The Health Foundation said: ‘Overall, our report lays bare the scale of the challenge facing policymakers in addressing endemic NHS workforce shortages. Although there is no ‘silver bullet’ solution to England’s workforce shortages, this report adds to a growing body of evidence signalling the need for a comprehensive, fully funded and long-term workforce strategy.’

This month, Pulse reported that up to 40% of funding available for hiring additional roles staff went unspent in each of the first two years of the scheme.

And the ARRS scheme could be defunded in two years, due to rising inflation, if an agreement on the ‘balancing mechanism’ can be reached.

Earlier this year, NHS Digital revealed that the overall number of staff vacancies in England has topped 110,000, increasing by more than 20,000 across 2021.

Im dreading getting old and ill

ARRS personnel: anyone would think there’s an unlimited supply of paramedics and associated AHPs, except there isn’t. There is also a huge shortage. Three of the four practices in our PCN have been advertising for a paramedic ARRS for several months now and not even a suggestion of interest. The government needs to provide practices with the autonomy to provide resources its population requires without hoops and strings and myriad T&Cs. But they refuse to do so because it does not fit with their plans to pare primary care funding back further and further and then tender off the item for service activities to the private sector one by one.

Phew, they can take over the IBS, panic attacks and mole that never changed. Experts in chit chats would be great. More the merrier.
This is becoming one big circus and all are truly welcome. Loop the loop.