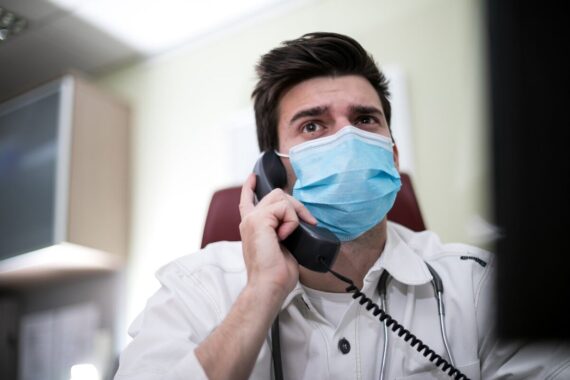 NHS England has confirmed plans for this year’s 10% increased elective activity target to be predominantly achieved through increased GP advice and guidance (A&G).

The plans were first revealed in draft guidance seen by Pulse last month, which set out that GP A&G ‘could contribute an estimated six percentage points’ towards the target of ‘over 10% more’ activity.

Final NHS England elective recovery planning guidance published yesterday enshrined the plans, including that the number of pathways ‘completed in primary care with the support of specialist advice’ without onward referral will be monitored through a new dataset – the Elective Recovery Outpatient Collection (EROC).

It said that further guidance on this monitoring approach is available on NHS England’s FutureNHS planning platform.

The guidance added that local commissioners will also be monitored against the target of a ‘minimum’ 25% reduction in the following up of outpatients by March next year.

They should plan how they will redeploy released capacity, including to ‘increase conducting A&G in co-ordination with primary care’, it said.

A&G involves GPs accessing specialist advice by telephone or IT platforms, rather than referring patients for a hospital investigation.

The guidance also added that local commissioners and providers should consider how ‘optimal referral management will happen’.

It said that plans must demonstrate ‘an ongoing commitment to the clinical validation and prioritisation programme, including the conduct of three-monthly reviews for patients waiting over 52 weeks and at least weekly reviews for those waiting longer than 62 days on a cancer pathway’.

However, it remains unclear who will be responsible for managing and validating waiting lists, with GPs previously told they could be asked to review hospital waiting lists for elective care.

And the guidance set out that local commissioners should ‘review of primary and secondary care operating principles’ to ensure patients are offered a choice of providers ‘at the point of referral into elective pathways’ via a ‘shared decision-making conversation’.

It added that primary care networks could be responsible for supporting patients who are waiting for elective care.

It said: ‘Systems should consider what additional support or services for patients on the elective pathway is available through local voluntary and community groups.

‘This may include work with primary care networks to recruit additional social prescribing link workers, care coordinators, and health and wellbeing coaches.’

ICSs must now develop plans outlining how elective targets will be achieved, including ‘going further for those that are able to’, NHS England said.

Chief executive of Lancashire and Cumbria consortium of LMCs Peter Higgins told Pulse that his ‘main worry’ is that A&G is ‘just another mechanism for pushing more work back to general practice’.

He said: ‘It can be a good thing if it’s planned well and it’s planned jointly between primary and secondary care, but the worry is [that] it’s just another mechanism – if it goes wrong or if it’s abused – for pushing more work back to general practice and that’s our main worry.’

He added that it’s ‘absolutely not’ fair that GPs effectively have been asked to mop up most of the hospital backlog and that there is no capacity to do so.

Mr Higgins said: ‘It assumes that capacity is there to do the work and it just is not.

‘It seems like the Government is full of good ideas, but not the wherewithal to implement them because there just aren’t the staff there, either in general practice, community services or indeed in hospital services.’

Former BMA GP Committee England chair and Leeds GP Dr Richard Vautrey added that while A&G ‘can often be helpful’, setting ‘arbitrary targets’ to increase its use could be ‘completely counterproductive’ if it becomes a ‘requirement’ and referrals are ‘restricted or prevented’.

Dr Vautrey, who is also Leeds LMC assistant secretary and Central North Leeds PCN clinical director, said: ‘Moreover, these plans make no provision for the necessary increase in the GP workforce or shift of resources required for more work to be done in general practice.

‘It’s not acceptable for GPs to be expected to help solve the massive backlog in NHS care without being given any of the funding required.’

In January, NHS England planning guidance set out ambitious targets for ‘over 10% more’ elective activity in 2022/23 than before the pandemic.

And the Government’s long-awaited elective recovery plan – published in February – stressed that GPs’ role in tackling the NHS hospital backlog will focus on the use of A&G to try to avoid ‘unnecessary’ referrals to secondary care.

But Government auditors have warned against ‘overloading’ GPs in clearing the elective backlog.

It comes as Pulse revealed earlier this month that GPs could be held liable for advice given to them by hospital colleagues about their patients via A&G services.

And NHS England warned last month that the second wave of the Omicron strain of Covid is putting the delivery of the elective care recovery plan at risk.

PCNs are due to be incentivised for using A&G through ‘Investment and Impact Fund’ (IIF) points worth £9.9m in 2022/23, however GP leaders have raised concerns about its workload impact in general practice.

GPs could be liable for hospital specialists’ advice under A&G, MDO warns

Another in the litany of genius ideas from NHSE. Because we waiting for some extra work to fill the day with plentiful resources, funding and absolutely no staffing issues. ‘Our cups runneth over …’

• Apart from the obvious , which is passing workload to GPs . And indeed , it is under the name of a GP for A&G ; not from nurses , not from ARRS
• Another punchline here is on the issue of face to face consultations . Undoubtedly, the pathways set up by specialists on A & G will , correct politically , request full FTF examination as well as initiating investigations .
• so it is about the number of GPs , unit?
But the numbers is not matching up 😈

Another spin off from this is rather politically incorrect; GP advised a patient to consider private referral 😈🤫

it is about the number of GPs , init?

Don’t stand in the way, or you’re going down the drain. And only you.

Didn’t an indemnity provider state that GPs are responsible for following the A&G management plan unless they refer instead?

yeah; much more importantly we are clinically and medicolegally responsible for those patients. It is not equivalent care. It’s phone a friend medicine. Most of the specialist care is the review of the patient. A text or phone call rom part of our 5-1o minute consultation with the patient, for a speciality we are not trained don’t equal secondary care specialist opinion. Why don’t the GPs in these articles mention that. Quite apart from the workload we don’t have the training. This is shite care. It’s dangerous and I am not up for it.

It added that primary care networks could be responsible for supporting patients who are waiting for elective care.
It said: ‘Systems should consider what additional support or services for patients on the elective pathway is available through local voluntary and community groups.
‘This may include work with primary care networks to recruit additional social prescribing link workers, care coordinators, and health and wellbeing coaches.’

Why are only 25% of surgeries considering option out of the PCN
FFS; when the patient needs a hip or cholecystectomy what bloody good is a wellbeing coach. It’s a joke. A joke I don’t want to be part of.

another nuggett of common sense from her !

i wish she lived in south wales – i’d love to buy her a pint !

Several years ago we had 30,000 GP’s the Government decided we needed 36,000 GP’s and set that as a target. We now have 27,800 GP’s, and that number is dropping daily.
The writing is on the wall, you cannot have ever increasing public demand fuelled by Government and NHSE diktat when you have a workforce deficit of 25%.
It is failing, people are suffering and those in ‘power’ are asleep at the wheel issuing more policies, more orders, more demands and threats.
What is needed is a huge sustained increase in funding for Community/Primary and Social care in their widest sense, or I suspect we will see further deterioration from the current poor baseline.

I think this is the same man. went nose to nose with neighbour. Not fit for any sort of public office in my opinion but truth and integrity isn’t a core value in the ruling party any more

The ‘elective recovery plan’ looks more inept and irrelevant by the day; NHSE basically just stirring porridge. But the targets are presuming large numbers of inappropriate referrals. And will create pressure for referrals management, likely to become external. I seek advice when necessary and refer as appropriate. Ease of A&G is welcome, inappropriate specious and potentially hazardous targets are not. It’s workload, plus: it won’t make any difference to elective waits, on balance probably will increase delays. And what of early diagnosis targets?
Well said, Dr Vautrey, and Stephen Mann in comments. Otherwise we’re the fall guys for idiots. The duck is a duck.

A further example of how completely useless NHSE are coming up with another crackpot idea. If a patient needs a specialsist referral it is because the GP does not have the knowledge/competence/expertise to manage that patient and requires a specialist opinion. Specialists are there because generalist are not expert on everything but do a pretty good job of being very competent in most areas. What they do not need is to be told what to do when they are clearly struggling. This exercise will consume even more resources and further degrade care in the UK.