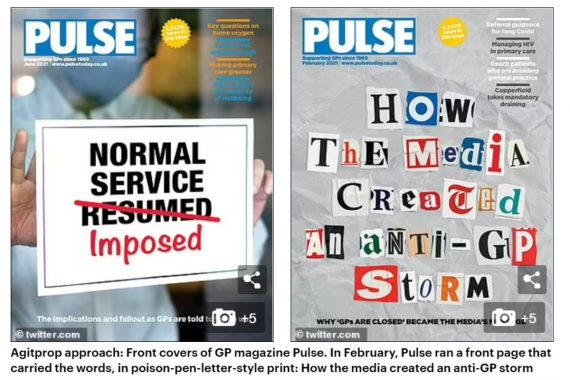 The Mail on Sunday has accused Pulse of ‘rabble-rousing’ over face-to-face appointments for patients.

In a piece which also heavily criticises GPs for airing their views on social media and urges them to quit Twitter, the newspaper claims there is a ‘hardcore minority’ who are digging in their heels by refusing to see patients face to face if needed.

The editorial by Mail on Sunday health editor Barney Calman claims that some GPs ‘will not be told’ that the shift to online consultations is causing harm and are sticking with phone or triage first.

It also condemns GPs for airing their views on social media with ‘ranty threads’ about political attacks and an overstretched system.

‘Occasionally, a civilian will pluck up the courage to post on one of these ranty threads something like: hang on a minute, my surgery has been welded shut since March 2020.

‘Doubtless, for every one of these, there are scores more patients, silently reading and thinking – how can I put this politely: how unpleasant these GPs are,’ the article reads.

The ‘hysterics’ are being led by the British Medical Association, and rabble-rousing GP magazine Pulse, the Mail on Sunday said.

It cites the Pulse investigation in February into media coverage of GPs and the June cover feature discussing how normal service is being forced on GPs.

In the latest feature, Pulse looks at the fallout from the NHS England letter sent on 13 May to GP practices which said ‘Practices should respect patient preferences for face-to-face care unless there are good clinical reasons to the contrary’.

The Mail on Sunday comment piece, which is headlined ‘All you GP face-to-face refuseniks take note’, said GPs should reconsider what they post on social media given it is being read not just by colleagues but by their patients.

That goes for all the GPs who ‘seem so incandescent’ at NHS England’s ‘fairly reasonable’ edict that they should offer face-to-face appointments if a patient requests one, the piece continues.

‘Indeed, given the hysteria, you’d think they were being ordered to do something appalling – not just go back to a way of working a bit more like they did before Covid,’ writes Mr Calman.

‘No one is under any illusion that the situation was perfect before Covid. Primary care was already short of thousands of GPs, while patient numbers spiralled. But in the majority of letters we received, readers said the same thing: they had all been perfectly happy with their surgery until March 2020,’ the Mail writes.

Pulse editor Jaimie Kaffash said: ‘At Pulse, we have always prided ourselves on being the voice for GPs who are often badly affected by negative coverage in some parts of the media. We will continue to be so, and we will continue to speak up for overworked GPs who always put patients at the heart of their decision-making.’

At the risk of getting a lot of flak——-the majority of G,P,s are an unpleasant lot

Kudos to Pulse in taking a bullet for GPs, and standing up to the Mail bully boys.
The Mail fails to understand the basic difference between “need” and “want” in the F2F debate, whilst ignoring the obvious need to maintain social distancing in our waiting areas.
Pre-pandemic style waiting rooms stuffed to the gills with asymptomatic variant carriers demanding their right to a F2F appointment is clearly dangerous lunacy.
Until the WHO declare the pandemic over we should continue to apply common sense and only provide F2F to those who really need it.

Oh that made me chuckle….the mail and its readers accusing others of posting “ranty threads”. I am literally laughing out loud

Reply
Unsuitable or offensive? Report this comment
Hello My name is 7 June, 2021 3:11 pm

oh please. can’t win can we? has anyone noticed we are thousands and thousands of GPs short in the UK. How do our rates of GP per head of population compare to european counterparts. I’m sorry we vociferously highlight this.

Better to do so and try to secure a better future for our patients. Enough is enough. We can’t plug the gaps and people are dying.

Thanks for a great vaccination effort and doing more than ever. Now stop slacking and get on with it! Those sleeping pills don’t prescribe themselves.

At least when we do it, it isnt to sell soon to be chip paper.

They’re still smarting from backing the losing side in WW .

Well it’s the Mail – says it all.
All “mail” ends up in the shredder. With the Kardashians, Harry and a bit of Beckham news. Not worthy of recycling even.

I’d be surprised if Barney believes what he writes, but I bet you he knows how many clicks it gets. Don’t feed the troll.
If you haven’t seen it, the “if I die, its your fault” video on YouTube was brilliant.
There are no easy answers here, but we still have lots of support among ordinary folk.y practice seem to have finally settled down in the last 2 weeks…hope you are all seeing demand slow a little.

I would see this as a badge of honour to be honest!
Thank goodness for Pulse. Thank you for all you do to raise the issues and provide a voice for ordinary GPs!

Well , like evil Mao once said , ‘there is nothing called unfounded love and there is nothing called hatred without a reason .’（沒有無緣無故的愛，沒有無緣無故的恨）
Congratulation , Jaimie , thanks to your big effort , only now Pulse is targeted in the limelight and ‘loved’ by a so called ‘famous’ tabloid . I predict Pulse will only win more awards of journalism end of this year 😎😄

Wonderful lyrics:
‘It is absolutely true cos it is read in Daily Mail’

Jaimie, when you win an award, please do a cameo with Dan and Dan, tributing the Daily Mail. 🙏🏾 😂

The Mail: so absorbent.

Being attacked by the Hate Mail – or is it the Daily Fail?- Should be seen as a badge of honour.