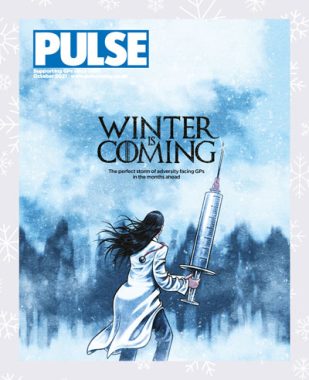 Most of you will have witnessed the effects of the horrendous cold virus that was doing the rounds in October, which rendered the most resilient of stoics – our esteemed editor (ahem)  – bedbound.

Many of you probably caught it. It’s supposedly pretty common, after all.

The effects of the normally mild virus were magnified, because lockdowns and homeworking meant there was less opportunity for bugs to spread in 2020, so it came back with a vengeance.

And it provided the slightest glimpse of what could be in store for the NHS over the winter period. The very worst of times, multiplied infinitely.

Covid circulating in all its variants would be one thing, alongside an unprecedented flu season and more than 5.5 million people on hospital waiting lists.

The Government pretty much took away the option of extra restrictions in the furore over last year’s (alleged) illegal Christmas gathering at Number 10.

Then there is the flu campaign. The vaccination programme may have to account for the flu season being 50% larger and starting earlier than most years.

Influenza is expected to hit more children than usual, and there’s the added concern of other respiratory viruses and interactions between them and different Covid variants, all of which have the potential to cause severe illness.

There is also the knock-on impact on secondary care. The NHS had made headway in reducing the longest waiting times after waiting lists hit an all-time high of 5.6 million people in July.

And all of this is without the support general practice hoped for and expected in October’s funding package, which was certainly more stick than carrot.

The money, ostensibly to see the sector through a harsh winter, was predicated on jumping through all manner of hoops – most notably, offering more face-to-face appointments. It would also identify practices that weren’t doing enough.

GPs had the task of managing the Covid booster programme, too, and the original target to offer boosters to all over-18s was brought forward one month to 31 December, which would require around a million jabs a day.

Not only is this at odds with the call to offer more in-person appointments, it seemed unattainable even with everything thrown at it.

Health secretary Sajid Javid said the extended booster programme means ‘not just that we have new sites, but we extend the opening hours, we open the sites seven days a week, we ask GPs and pharmacists to do more’.

Which, following the way the Government has treated GPs in the past year, seems very much like a case of a philandering spouse crawling back when they need something.

Covid boosters over 90% effective in adults 50 years and over, study shows