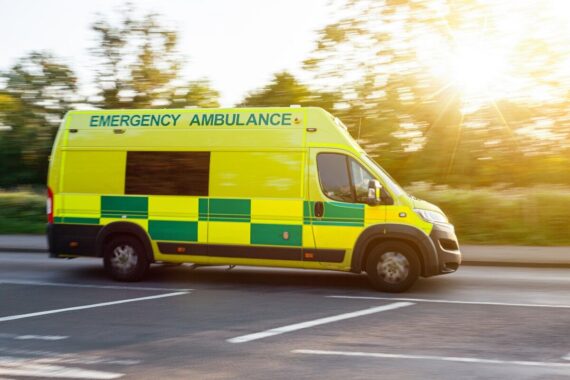 A practice had to be evacuated with GP staff requiring medical attention after a violent attack from a patient.

Police were called to Cottingham Road surgery in Corby last week and arrested a man after a patient smashed up screens at the front desk, pushed over computers and printers and threatened staff.

One staff member needed stitches after they had their face cut open and another suffered a blow to the head and grazes on their arm.

A third staff member, who had only joined the practice that week, was very shaken up.

A statement on the practice’s Facebook page from hub manager Emma Downs, first spotted by the Northants Telegraph, said the whole team is ‘understandably upset and shocked by the incident’.

It reads: ‘Whilst, sadly, we are somewhat used to verbally aggressive and, on occasion, threatening behaviour from patients, I am sad to say that yesterday was a level of violence towards our team that we have not seen before.’

Ms Downs praised her colleagues: ‘The team on site handled this exceptionally well. Patients and staff were quickly evacuated to safety, police were called and clinical care sought for the injured staff in a calm and considered fashion.’

She added: ‘The behaviour of our team was exemplary and is testament to the dedication they show our organisation and patients day in, day out.’

She said police are investigating the incident, while the practice undertakes a ‘full review’ of their ‘approach to aggressive and violent patients’.

Police told the Northants Telegraph: ‘A 46-year-old man of no fixed address was arrested on suspicion of assault and causing criminal damage at Lakeside Surgery in Cottingham Road, Corby.

‘He has been released on police bail pending further enquiries.’

Almost one in three GPs and practice staff have been physically abused at work by patients, according to the shocking results of a recent survey.

Rising levels of abuse against GPs and staff

Over the summer last year, GP practices were targeted with hoax bomb threats and receptionists were attacked with blood-soaked tissues.

Later in the month, a man was charged with assault after attacking four staff members at a GP practice in Manchester.

And a Staffordshire GP surgery was forced to close for two days due to staff receiving verbal patient abuse.

Rising levels of abuse against GP practice and pharmacy staff has prompted one ICS to launch a campaign urging patients to consider what would happen if the staff member quit their job.

Meanwhile, the Metropolitan Police is working with Londonwide LMCs to produce guidance for GP practices on how to minimise violence towards staff.

The individual and all the rest should start saving early for their private healthcare.