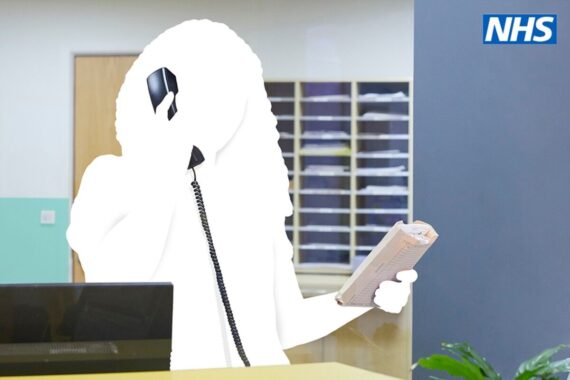 Rising levels of abuse against GP practice and pharmacy staff has prompted one ICS to launch a campaign urging patients to consider what would happen if the staff member quit their job.

The West Yorkshire Health and Care Partnership (WY HCP) launched the ‘Leaving a Gap’ campaign, which uses images that has cut out staff members from important positions, such as manning GP receptions.

The WY HCP said that frontline staff such as GP receptionists do deal with the majority of insults and threats.

They said in a statement: ‘Teams have been spat and sworn at, their cars damaged, received death threats and been in tears, regularly.’

Chair of WY HCP’s clinical forum Dr James Thomas said: ‘One conversation can be enough to hurt. It’s important that we all take time to consider our behaviours and how it can impact on others. Being kind can make a huge difference to someone’s day.’

Leeds GP Dr Richard Vautrey, former chair of the BMA’s GP Committee, said: the campaign comes as GP services ‘remain exceptionally busy’, and ‘whilst GP teams are working as hard as they can we know it can be very frustrating for patients’.

‘This campaign is all about asking people to take a moment to think before speaking with our staff. Abuse is significantly impacting staff morale at a time when the workforce has never been so stretched.

‘It is in danger of driving away staff from a profession under pressure – staff leaving their jobs won’t help anyone and will only make the situation worse.’

Nearly three quarters of GPs are experiencing increased levels of patient abuse compared with before the pandemic, a Pulse survey carried out last year showed.

In London, the Metropolitan Police is working with Londonwide LMCs to produce guidance for GP practices on how to minimise violence towards staff.

And NHS England primary care medical director Dr Nikki Kanani said in December that the NHS would do ‘everything it can’ to share the ‘right messages’ about general practice amid ongoing abuse and criticism.

A man charged with assault after attacking and injuring four GP practice staff last year has been scheduled to stand trial at Manchester Crown Court this month, although this has been delayed to the summer as the case was not ready.

Also last autumn, a GP ‘nearly lost his sight’ in a racially motivated attack where an explosive device was thrown in his face.

In other breaking news each patient has the ‘right’ to abuse GP healthcare staff once a year as only threats or violence quality for immediate off listing….

Told you. There’s the poster. Wow.

SO : basically you just depersonalised the human being, by cutting out their detail and face. Comedy. Because now they’re irrelevant, generic or a walk-over? Soulless, bland and faceless?Please – you should work on your nannying marketing. It’s embarrassing.

I think I’ll stick to the be rude to any of us twice and you’re out, be violent or threaten it once and the police are called, and you’re out, and my new favourite, be unpleasant, sarcastic or demeaning and we’re going to keep a record of exactly what you say, do it too often and guess what? You’re out. We don’t accept apologies either.