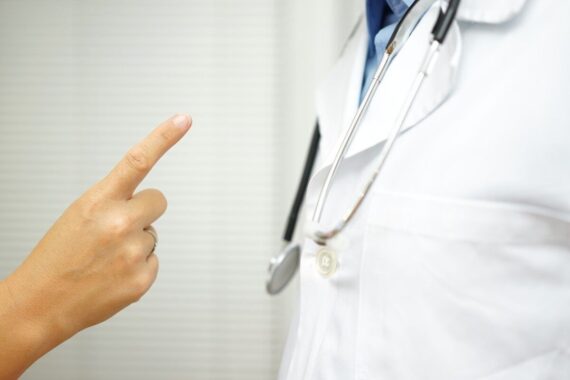 Three in four GPs have reported facing increasing patient abuse last year, according to a major survey by a medical defence organisation.

The Medical and Dental Defence Union of Scotland (MDDUS) surveyed almost 2,000 members across the UK, including 668 GPs, about their experiences last year compared with 2020.

It revealed that 76% of GPs reported an increase in verbal abuse from patients towards them and their practice staff. Half of these (38%) said this had ‘significantly increased’ and the other half that it had ‘somewhat increased’ throughout 2021.

Female GPs were more likely to face verbal abuse or aggression than their male counterparts, with 81% reporting an increase in this compared with 72% of their male colleagues.

The survey found that this has led to a ‘huge increase in work-related stress’, MDDUS said.

Among GPs who experienced verbal abuse or aggression in the workplace, 83% said they felt ‘more stressed’ than they did in 2020.

MDDUS chief executive Chris Kenny said: ‘The pandemic has stretched our healthcare professionals to the limit. For those at the very frontline, it is clear now that the levels of stress have reached an almost unsustainable point.

‘GPs urgently need recognition, reassurance and realism to support them so they can reset their relationship with patients.’

He added: ‘These findings should be a wake-up call for policymakers up and down the UK. Their decision-making must factor in the clear connection between adequate funding and support for primary care services and health professionals, and patient safety.’

She said: ‘It’s not nice but I’m not surprised. Patients are frustrated because we can’t offer the service that we’d like to because of the cuts and the extreme strain that we’re under.

Dr Applebee added that ‘negative press’ from newspapers such as the Daily Mail add to the problem because they ‘fuel expectation and blame general practice for things that are completely outside our control’.

She said: ‘Patients are led to expect something and to blame us when it doesn’t go the way they want. What we get an awful lot of is patients not understanding that we can’t influence the speed of their hospital appointment.’

Meanwhile, the survey also revealed that GPs are ‘highly concerned that neither Government nor regulators have the right systems and rules in place to deal fairly with complaints made by patients about decisions or actions taken during the pandemic’, MDDUS said.

It found that more than 70% of GPs said the volume of complaints they received had increased and of those, complaints relating to ‘the availability of consultations’ had gone up by 82%.

But 70% of GPs do not think the Government is prepared for the impact of complaints relating to healthcare delivered during the Covid pandemic and more than half (55%) ‘remain concerned’ that their regulator is also not prepared.

Dr John Holden, MDDUS chief medical officer and a former GP, said: ‘The results of our survey are distressing. We know GPs work hard to ensure all patients receive care when they need it.

‘Being a GP can be one of the best jobs in the world, but right now GPs need to feel valued, supported and empowered.’

He added that regulators need to ‘redouble their efforts to communicate to all healthcare professionals that their systems have been revised to take into account the extraordinary conditions doctors and dentists have worked through since 2020’.

BMA GPC England deputy chair Dr Kieran Sharrock said: ‘For doctors to be the brunt of violence and abuse in this way is wholly unacceptable; it’s no surprise that GPs feel as undervalued as they do and are considering leaving the profession, as this report and multiple BMA surveys have shown.

‘This deeply disturbing trend must be addressed. The Government must not only be honest with the public about what general practice can achieve right now – given the chronic workforce shortages, backlog, and lack of resource – but also actually support the profession so that we can provide the kind of care we want to.’

It comes as the latest edition of the official GP Worklife Survey has painted a dire picture of the realities of working as a GP in England, revealing that over a third may likely quit direct patient care within five years.

And rising levels of abuse against GP practice and pharmacy staff last month prompted one ICS to launch a campaign urging patients to consider what would happen if the staff member quit their job.

” I don’t blame the patients”.

Time to don the smoke hood : I can smell the martyrs burning from here.

Abuse me or my colleagues ?

Time for you to go ta-tas.

A lot of this is part of a gradual process of infantilising patients so they are now like toddlers having a tantrum because they don’t get what they want. A lot of what they want is in secondary care but we get the blame. Sadly the idea that the customer is always right is driving a complaints system that prevents dealing with the tantrum as you would in a real toddler.

The public sector takes the abuse, as the politicians and elite are impenetrable. The police, doctors, nurses, teachers and TomDickAndHarry. That is why no one wants to work with the British public, lets be honest. Not even on a package holiday in Malaga or Benidorm.

You’ll be deducted in 28 days.
Irreversible breakdown in relationship.
Move on.
Your life is worthwhile too you know.
They’ve always got 111 and some app, don’t worry.