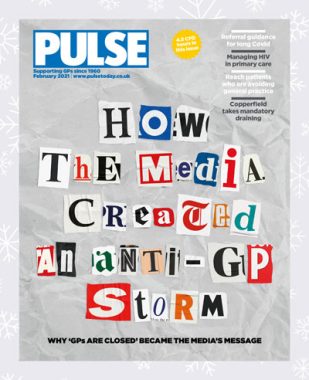 Today in Pulse’s review of the year, Allie Anderson focuses on how the media have waged war on GPs

One of the toughest things general practice has had to deal with in the last two years is negative media coverage.

When pressures have been at an all-time high, frontline healthcare workers would hope for the unwavering support of the national press. Instead, they’ve faced a campaign of untruths that has stirred up patient resentment.

A harmful message in many of the national headlines has been that, throughout the pandemic, general practice remained closed. This is particularly jarring, as GPs were not only seeing patients face to face when the situation required them to, but they were also risking exposure to Covid – and hence, their own lives.

In February, Pulse conducted an analysis of press cuttings about GPs during 2020, compared with the previous two years.

For 2020, 45% of pieces had an overall negative tone towards general practice, of which 20% directly blamed general practice for lack of access. The amount of negatively toned coverage was twice as high as in the previous two years (23% and 19% in 2019 and 2020 respectively). Articles suggested that GPs were ‘refusing’ to see patients and even blamed GPs for an increase in cancer deaths.

When NHS England wrote to GPs in September 2020 ‘reminding’ them to see patients face to face, Telegraph columnist Allison Pearson tweeted: ‘About time. After six months of hiding in Fort Knox… GPs told to give patients face-to-face appointments or be investigated.’

Some held onto a belief that general practice would soar from zero to hero as the Covid-19 vaccination programme rolled out. But sadly, things got even worse in 2021.

The Mail on Sunday began a campaign for GPs to see patients face to face, and the Daily Mail followed later in the year. Towards the end of the year, the whole of the media – including the Guardian – were beating the same drum: that GPs were failing in their duties.

When health secretary Sajid Javid jumped on the bandwagon in September, claiming that some GPs were ‘still not opening their doors’ to see patients, hopes were dashed as quickly as they were raised.

Predictably, the inflammatory claims intensified the abuse and venom aimed at GPs and staff– and some GPs and practices faced horrific attacks.

The truth was this, and had been since the very start of the pandemic: that patients could see their GP in person if their condition made it necessary. More face-to-face appointments opened up as the situation became more safe, and by autumn 2021 waiting times were falling.

Where in-person consultations were not available or were not needed, this did not mean that access was denied. Remote consultations have proven successful for many, and it seems reasonable that this should continue.

A Pulse survey just a few months ago revealed that half of GPs believe it’s not possible to return to pre-pandemic levels of face-to-face appointments because of problems with infection control and increased demand.

Eight in 10 think it is unnecessary to see so many patients in person, since we’d lose many of the benefits of remote consultations.

GPs we spoke to concurred that the main reason they and their colleagues were vulnerable to such attacks is that they have a long-term, close relationship with patients that makes them easy to scapegoat for failures in the system.

What’s needed now is a stream of positive, affirmative messages from the profession to counter the constant negatives – and some accurate headlines wouldn’t hurt either.

Truth is drowned out as media attacks intensify

I’m more interested in why not what. The Tory media is the government’s mouthpiece. Johnson and Gove are journalists, go figure. It’s always all about the agenda. As independent contractors not employees we are too powerful for the liking of the government and NHS England (who are a government body remember).
As we do 90% of NHS consultations we also are the backbone of the NHS.
And an uncontrollable backbone of the public’s most loved institution, which has considerable political influence, is a tricky thing for a government who is accustomed to do whatever they want, legal or not.
Add to that, the government wants to carve up NHS services for big private health companies, which will be difficult to do with an independent primary care service, we do all the referrals remember.
Starting to see why there has been a deliberate campaign of undermining of GPs?
Then the plans to share and sell off NHS data, the valuable bit all being in the GP records, and we blocked their plans.
Hope it is starting to be obvious why we are under fire.
And what do we do?
Nothing. No need. Don’t stress it. Focus on the job.
Renegotiate the contract to make sure partnerships and hence surgeries are protected and sustainable for the future. ie payment by service.
Limit or ditch PCNs, NHSE/government’s back way to try and turn us into controllable employees; remove our independence and so strength.
And watch the government try and win this.
See we don’t need to win the media war, the popularity war or the narrative.
That’s the government’s box. Politics essentially being a popularity and media competition.
We just need to treat the patients.
So I suggest heads down, focus on the patients and the job, and BMA: get negotiating.