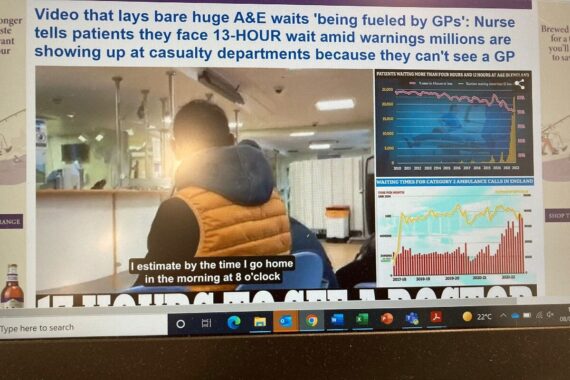 GP leaders have been outraged by a tabloid claim that GPs have ‘fuelled’ a crisis in England’s A&E departments.

The Doctors’ Association UK (DAUK) has raised a formal letter of complaint to the media regulator about the ‘misleading’ anti-GP coverage by Mail Online.

The letter, published yesterday evening, has collected more than 1,000 signatures in less than 24 hours.

An article that topped the Mail Online website on Wednesday was headlined: ‘Fury at video that lays bare huge A&E waits ‘being fueled by GPs’: Campaigners say desperate patients are turning to overwhelmed casualty units because they can’t get face-to-face appointments – as video shows nurse announcing 13-hour wait’.

DAUK announced yesterday that it had ‘raised a formal complaint to IPSO calling out Daily Mail claims that GPs are fuelling waits in emergency departments’.

It added that the Mail’s coverage ‘inaccurately blames GPs for delays within hospital settings and also bed shortages’.

A DAUK spokesperson told Pulse that it has already approached the Mail Online with its formal complaint and that it plans to submit its letter to IPSO on Monday.

The letter, currently open to signatures, said that the Mail Online’s story breached the ‘accuracy’ clause of the Editors’ Code of Practice (Clause 1).

It said: ‘There is no evidence whatsoever to demonstrate that long A&E waits result from, or are fuelled by, GPs.

‘This headline is clearly inaccurate, misleading and not supported by [the] text. Whilst quotation marks are used in the headline, these specific words are not attributed to anyone (anonymous or otherwise) in the article.’

It added: ‘All frontline health services are stretched at this time, yet [article author] Mr Boyd unreasonably and inaccurately chooses to blame GPs for delays within hospital settings and also bed shortages.

‘Throughout his article, Mr Boyd makes no attempt to distinguish between comment, conjecture and fact.’

‘It is evident that this is not an opinion piece, and it appears that no GPs were interviewed and no professional medical bodies were approached for comment.’

The DAUK said: ‘We respectfully seek your support to help correct this false narrative and restore the integrity of our GPs that continue to work above and beyond the call of duty.’

GPs reacted with anger towards the ‘disgraceful’ Mail Online article.

In an email to the DAUK, seen by Pulse, Mail Online said it ‘will not be retracting the article or issuing an apology’.

It added that the article ‘faithfully reports’ on comments from a patients’ campaign group, patient testimonies and information from the Royal College of Emergency Medicine and CQC.

It said: ‘It is worth pointing out that balance is also provided: the article discusses the other factors contributing to this issue, such as the staffing crisis, which is referred to as being thought to be among the main causes.

‘In view of the above, we cannot agree with your assertion that the article is inaccurate or that the reporter has somehow misinformed the public, as you suggest.’

Meanwhile, the RCGP yesterday issued a statement that said there is ‘no known evidence linking long A&E waits to GP access’.

RCGP vice chair Dr Gary Howsam said: ‘Reasons for mounting pressures on A&E are many, including lack of beds and the crippling workforce shortages that are affecting the entire NHS, but we’re unaware of any hard evidence that significantly links them to GP access.

‘Far from intensifying pressures on emergency departments, GPs and our teams make the vast majority of NHS patient contacts and in doing so we alleviate pressures elsewhere in the health service, including A&E.’

He added: ‘We share our patients’ frustrations when they find it difficult to access our care and services. But when this happens, it is the result of escalating workload coupled with falling numbers of fully qualified, full-time GPs.

‘General practice, like the rest of the NHS, is under intense and unsustainable pressure. GP teams are working to their absolute limits, consistently making more patient consultations every month than in the same month pre-pandemic.’

The statement referenced both the coverage in the Mail Online and a similar report by the Telegraph, also published on Wednesday.

And local GP leaders from across the UK last month condemned hostility against general practice in the media at the BMA’s UK LMCs conference.

But in October, IPSO ruled that the Telegraph did not breach journalist code by publishing Allison Pearson’s anti-GP columns.

Last year, Pulse covered extensively how GPs were vilified in the mainstream media for allegedly shirking their patient-consulting responsibilities.

And a Pulse survey detailed how the public perception led to increased levels of abuse against GPs and staff – especially receptionists.

RCGP chair Professor Martin Marshall recently said that the long-standing row over the shift towards remote consulting in GP practices has now ‘settled down’.

Keep kicking the crap out of us and we will keep leaving never to return; press , public, politicians they dont get it.Now where does the bullying culture come from in the UK seems like its ingrained into the fabric of the establishment.

If all these patients should’ve gone to the GP – probably easy to rattle these off single handed in 10 mins each…
Clear the department in a few hours surely?!

The Telegraph headline is
“A&E patients told they face ‘unacceptable’ 13-hour wait: Health Secretary says NHS is doing ‘all it possibly can’, but critics say lack of GP appointments is forcing people to turn to hospitals”

I don’t really have a problem with this. It may be the case that GP capacity issues are putting pressure on A&E, I certainly wouldn’t discount that possibility. Happily, the Telegraph phrasing implies (to me anyway) that this is the Health Secretary’s problem.

The issue is with the Mail headline is that it implies that individual GPs are culpable for conditions in A&E.

Sad that there are truly 13 hour waits again in AE, and no beds.

If they are there for Non Accident/Emergency reasons, triage and re-divert them away from the hospitals and back to 111/community day time care, for routine and non essential care.

Or face the real problems and try reopening the thousands of beds, and the many wards that have been shelved by successive governments in cost cutting measures, to take capacity down below minimum safe standards, and hold the secretary for health to account for this patient safety disaster.

Truth is they couldn’t reverse this trend even if they paid through their teeth, as there are no longer sufficient staff in the NHS to run these beds/wards.

Time to stop hiring managers to measure pointless metrics, and restart paying NHS staff in training a wage, when they are doing patient facing work, so we no longer have to see nurses and staff turning to food banks, and choosing to feed their families, or pay to park in order to do their ‘training’ shift looking after NHS patients.

Some just love a visit to AE..it is no different to the weekly visit to GUM clinic, Weatherspoons and the newsagent to get the Daily Smell. Boredom, brews banal banter of chest pain and palpitations after a hangover, and how your knee is sore after your 5K run and trip skiing, and how you bottled your “mate” as banter, of you’re bloated.
Bill them.

Free at the point of abuse.